The first time that I visited the Exploratorium, a science museum in San Francisco, I already knew I would be coming back. As a scientist, I was fascinated by the hundreds of playful exhibits; they were simple, colorful capsules of art delivering a health dose of science. The general energy at this place was so inspiring that I soon got on-board as a volunteer, which has been quite a special experience.

Although I can spend several hours exploring the premises all day, one of my favorite Exploratorium events is the After Dark Thursday program. This public program is a unique blend of fun and education for adults, based around a different theme each time. The generally kid-dominated Exploratorium changes its mood at the After Dark setting where adults explore the floor amidst a relaxing atmosphere with a drink or two from the bars set up especially for the event.

I have volunteered a few times to help set up before the program. In general, the volunteers are a mixed bunch in terms of their educational and professional backgrounds. They do have some common interest: their shared love for science and the choice of spending their time for helping out at the event. The behind-the-scenes starts somewhere between closing of the museum to the general public and re-opening for the After Dark enthusiasts. Allotted tasks include setting up chairs for a seminar, putting up cocktail tables across the floor, or preparing for some special exhibits. After a tour of the floor to scout the different exhibits for the evening, its time to hog some free pizza, and station ourselves at the designated posts.

Once the doors open to the public, the floor is full of energy. The evening program differs based on the theme. There are talks, guest demos or exhibits, accompanied by the regular ‘explorables’ table to engage people in some fun science experiments, and the corner where ‘explainers’ demonstrate dissections of flowers and cow-eyes. I personally immensely enjoy watching the crowd explore the different set-ups, some fascinated more than others, their reactions evident from their excitement to try out new things. Some enthusiastic ones even dress up according to the theme. Below, I have compiled pictures from some of my favorite ones below that bring out the general atmosphere at the event.

Here, the theme was ‘Glow’: (clockwise) we have some enthusiastic attendees dressed up for the theme, Exploratorium physicist Ron Hipschman’s talk about glowing objects, and a laser obstacle path.

Right before the presidential elections, we had a ‘Persuasion or propaganda’ themed event. My favorites at these events were the screen printing (left) and wheat pasting (right) workshops. 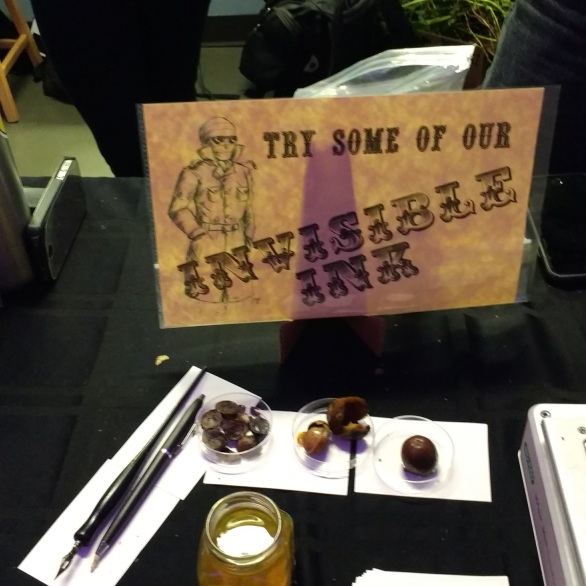 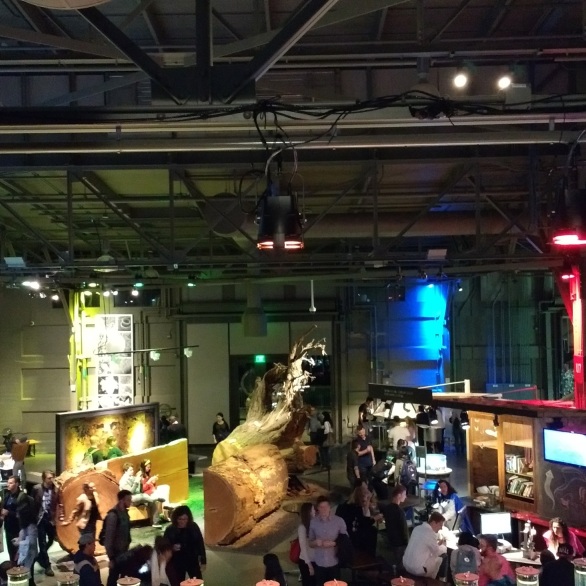 One of the most enjoyable evenings for me was the ‘Super-powers’ themed program. We had a variety of stalls ranging from pigeon adoption to the iNaturalists talking about chemical communication between plants, fluorescent nuts, and promiscuous fungi. One of the most popular exhibits was the virtual reality stalls by CyArk where people were thrilled to take a virtual tour of Myanmar or Greece.

In closing, I would like to encourage everyone living in (or visiting) the San Francisco bay area to check out the Exploratorium and its public programs. Recently, I read about some exciting news regarding plans to set up a similar museum in my hometown (Pune) in India. I hope they do go ahead with it, and we have more such hands-on science exploration opportunities in several more places.

2 thoughts on “Exploring ‘After Dark’”