When I started ‘Science in the Backyard‘ series, I hoped to shed light on some science events in my neighborhood and inspire others to start some in yours. Now, after actively looking out, I found so many events that I am having a hard time keeping up and reporting all of these. One such event, which I promised you in my previous post in this series, was my elephant seals viewing trip to Ano Nuevo state reserve.

The common question of some friends seemed to be “What is the big deal? Living in California, don’t we see seals all the time?” So, the first order of business is the following announcement.

What is the Difference Between an Elephant Seal and a Common Seal?

Molting times are also different for males and females. In a nutshell, theirs is a complicated life cycle, and the only time to see males, females, and pups together is from December to end of March. Around this time, the females have given birth to their pups and are busy nursing them, and at the same time looking out for mates to produce the next offspring. Elephant seals were in fact close to extinction at a point, but they made a remarkable recovery, all thanks to their love of breeding!

Male elephant seals possess a trunk-like appendage, giving them their name, while females are about half their size and lack this appendage. I found it interesting (and slightly creepy) to actually visualize the different sizes of females and males (this is called sexual dimorphism) with their skulls arranged side-by-side. 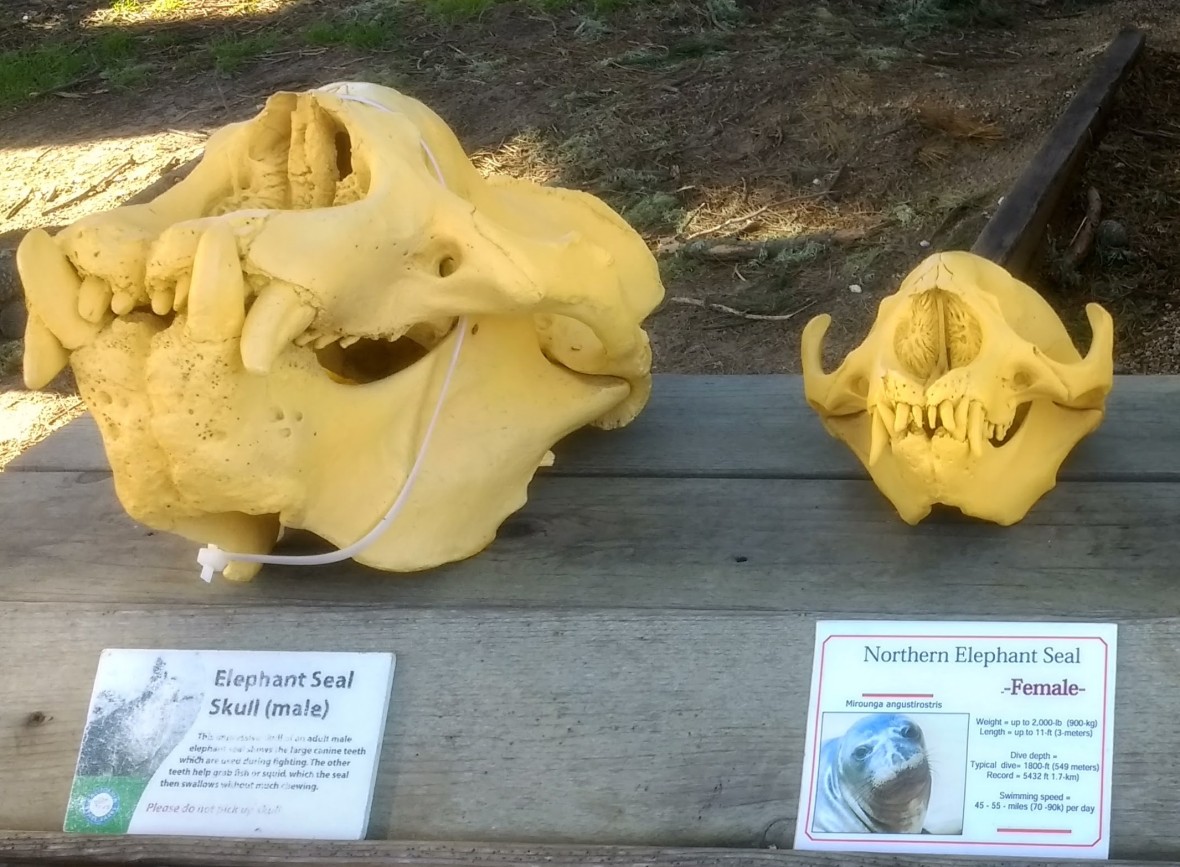 The Ano Neuvo state reserve is one of the few places in northern California with perfect conditions for these seals: proximity to water and availability of enough beach space to keep the young pups from being washed off into the water. Hundreds to thousands of elephant seals can be easily spotted on the beach areas during breeding season. Our tour leader was a very knowledgeable docent (park volunteer) and informed us beforehand of the eventful calls and actions to watch out for. For instance, pups make a peculiar sound for food, which is different from the cry of a female being chased by a beta male.

As with all animals, the females prefer to be impregnated by the alpha male. Once in a while (turns out this is every few minutes), some beta male tries a sneaky attempt at mating, which, if the female is lucky, is ruined by the alpha male, who rescues the ‘damsel in distress’ based on her calls. We saw some very dramatic action of alpha males chasing the beta males around, and one aggressive one even dared to spill some blood.

Interestingly, recent research has shown that beta males recognize the rhythm of alpha male call, making it easier for them to avoid them.

Overall, I found this tour quite informative and interesting. If you are in the area, there are still few days left to take a guided tour and catch these seals in action. After this dynamic season, the females and males will head back into the water, while the pups stay till May, learning swimming and feeding themselves. So, that might be another interesting time period to watch these cute pups fumbling around in shallow waters. Lastly, for those of you who are far off from the elephant seal action, I hope I could give you a glimpse into the life of the elephant seals.

Join 1,314 other subscribers
Follow Backpack full of questions on WordPress.com